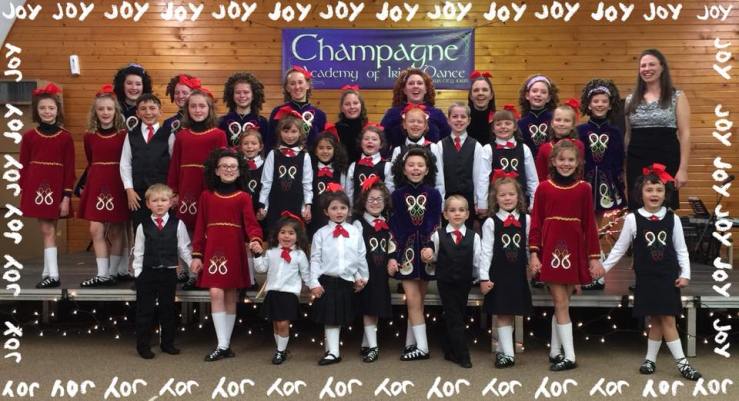 Nothing makes me merrier than celebrating Christmas with Iowa’s finest Irish dancers as fiddler for the Champagne Céilí Band.

Introducing Lucy, my featured musician for July and August! 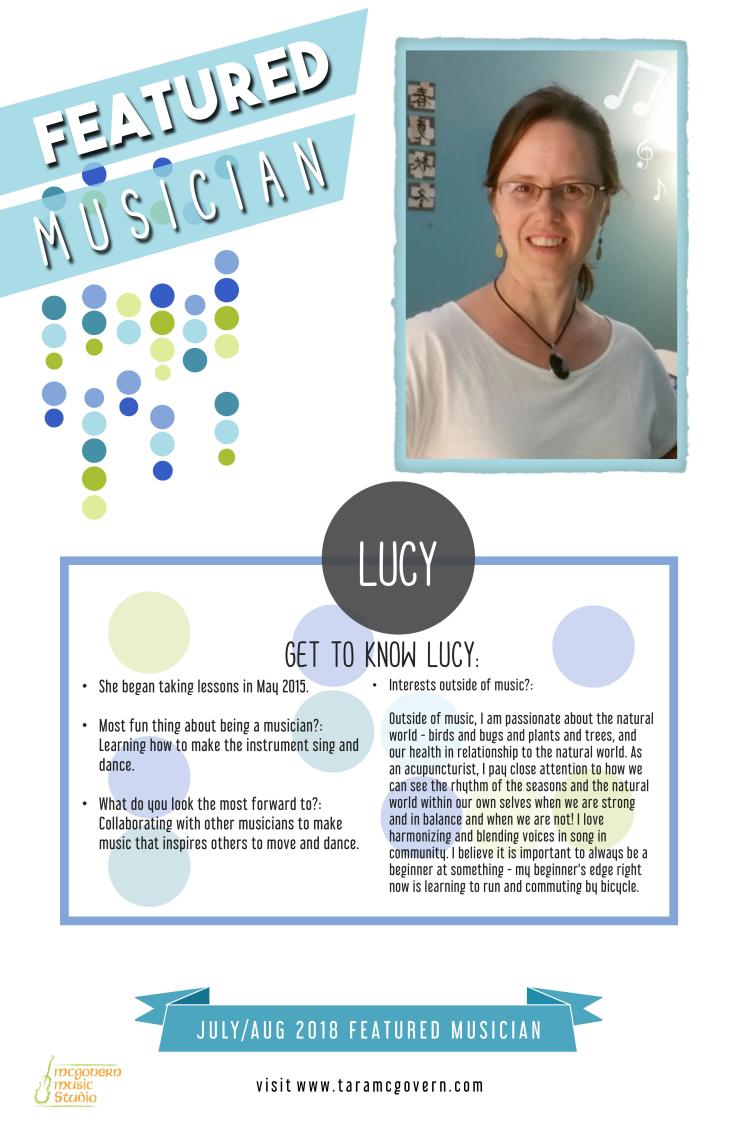 One of my favorite aspects of producing these featured musician profiles every other month is what I learn about my students and how that new knowledge relates to what I’ve already seen from them in the context of working together each week.

I knew of course that Lucy has been taking lessons since May 2015 because my studio software keeps track of these things for me. When I consider all that Lucy has accomplished in just over three years of study while at the same time establishing a thriving acupuncture, Asian bodywork therapy & Chinese herbs practice, I am overwhelmed with adoration and pride.

Lucy regularly attends and fully participates in various Irish music sessions around town. She has also performed locally many times and a recent successful open mic performance culminated in her being invited to open for a touring folk band. I’m going to pause there and let you take that in. Amazing.

Lucy has listed “collaboration with other musicians to make music that inspires others to move and dance” and that inspires me to fondly remember that Lucy and I first met in a dance class. Her innate love of moving to music comes through so beautifully in her playing.

I also love what Lucy has to say about the rhythm of the seasons, community and the importance of embracing the beginner’s mind. These are all deep values for me as well and are the roots of where I find my purpose as an artist.

Congratulations to Lucy for all she has accomplished, for all she brings to our community, and for her sheer courage, determination, and dedication to playing her important part in our miraculous musical ecosystem. 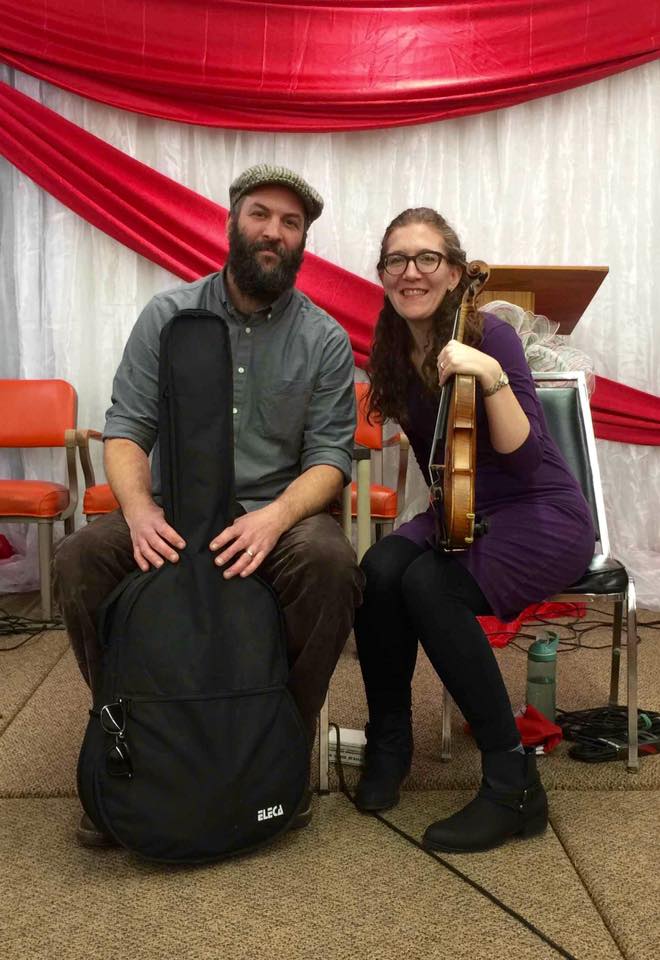 Tom Stoeffler and I loved playing for the Champagne Academy of Irish Dance‘s Christmas Céili 2017.

Awesome job, dancers! Thanks for including us.

As a proud returning member of the Champagne Ceili Band, I warmly invite you to join us on Saturday, December 16 at 2 pm at the Johnson County Fairgrounds.

Christmas Ceili 2017: Christmas in Killlarney will be an afternoon of dance, music, fun, food and community. 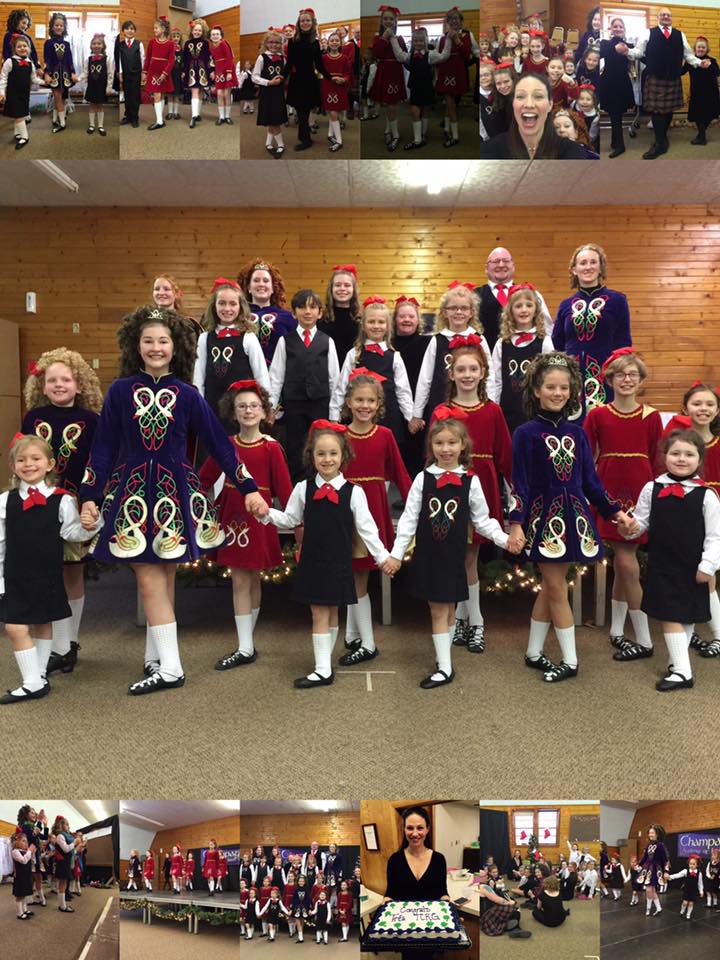 Watch your favorite Irish dancers perform both traditional and contemporary Irish dance along with some seasonal favorites! Then join in for a jig yourself!
Performance
Ceili (social dance)
Pot luck
Tickets sold at the door: $16
3 and younger free (on lap please) 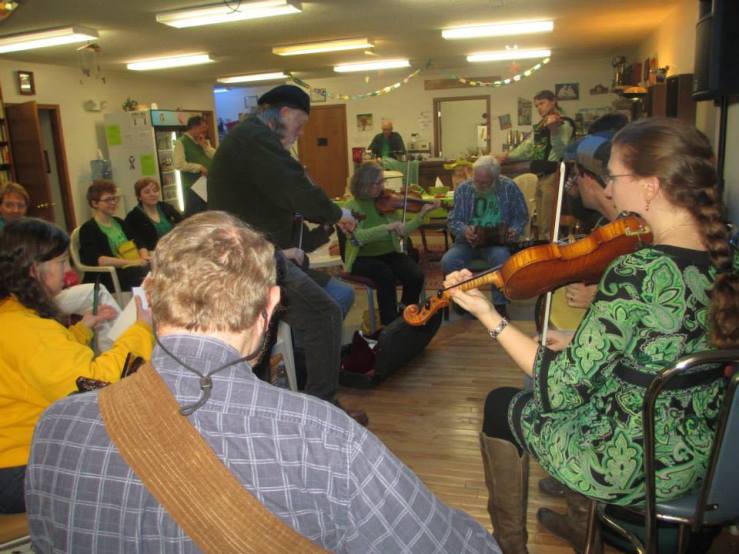 St. Patrick’s Day as it is observed in most American cities is a consumerist sham. Sure, it started in the early 17th century as a religious feast day honoring the death day of St. Patrick in 462 AD, but it has devolved to a level of kitsch that deters many from any desire to observe the day at all.

The arguments against the celebration of St. Patrick’s Day are sound. Patrick, or Maewyn Succat according to some sources, wasn’t even Irish, for one. According to The Confession of Saint Patrick, he was a British teenager who was captured by Irish pirates and taken as a slave to Ireland where he lived for six years before escaping. He later became a cleric and then a bishop who returned to northern and western Ireland to spend the rest of his life evangelizing, ordaining clergy, and organizing a new religious order.

The most famous legend attached to St. Patrick also doesn’t hold up well in the light of modern interpretation. All scientific evidence suggests that the post-glacial  island of Ireland never had snakes in the first place so this notion of St. Patrick banishing them can only be a symbolic representation of what he actually did destroy, the Druidry of the native Irish people.

Leaving history aside, there’s also the problems with how St. Patrick’s Day is most commonly celebrated now. Namely, with lots of green beer and t-shirts emblazoned with tasteless stereotypes. Google ‘Irish yoga’ if you’re confused.

That’s the bathwater. Now let me describe the baby.

The music of Ireland, of which I have been both scholar and devotee for more than three decades, is compellingly, heartrendingly beautiful. The same can be said of the dance traditions with the additional observation that Irish dancers are also dedicated and capable athletes. Irish food has never gotten the respect given to other European cuisines but if you’re ever actually had good Irish food, you know as I do how hearty and tasty it can be.

The place to be in eastern Iowa on this coming St. Patrick’s Day (Friday, March 17) is Uptown Bill’s Coffee House in Iowa City beginning at 6 pm. Bring a dish to pass in the potluck and an instrument to join in the open session that follows dinner. Maybe you’ll go on after the festivities and find yourself some green beer. Whatever floats your boat. There’s no wrong way to celebrate but there is more than one way. 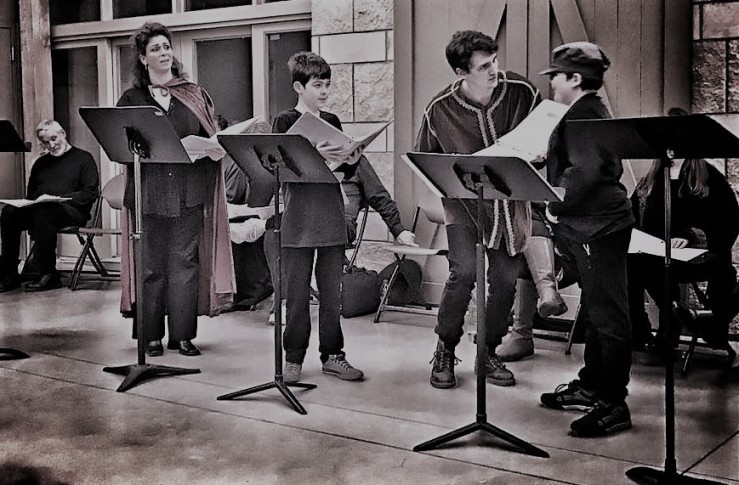 I am not the only American to have spent the past week alternately devastated and enraged but I am so grateful to have also experienced flashes of true hope and deep love for how my community has responded.

Between our event on Friday which raised $833.25, Writers Resist! last Sunday, and The Last Night in America organized by Megan Gogerty on Thursday, eastern Iowa artists have raised upwards of $3700 for the Iowa ACLU this week. Many people do not realize that the ACLU is a non-partisan organization that prides itself in upholding everyone’s civil liberties, no matter who they are or what they believe.

We are going to take care of each other. We are going to resist injustice. We are going to pay attention and participate in the democratic process. We are going to use our art to magnify what is going on around us because, as my friend and mentor Ron Clark said recently in a Press-Citizen interview: “It’s our artistic community that most effectively holds out a mirror and says, ‘Look at what we have become.'”

There are many petitions circling. I’d like to direct your attention to this one in particular asking that we preserve the National Endowment for the Arts and the National Endowment for the Humanities. When I signed it, it still needed almost 100,000 more signatures to get a response from the White House. This is quite literally the least you can do but is still so important. 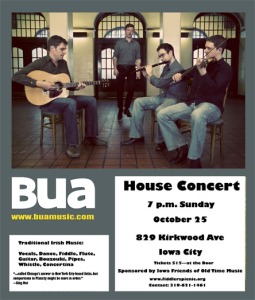 If you click on the image, it will open to a larger size but here’s all the information that you need cut and pasted below:

We have a new tradition among my grade 7 and up musicians to have our annual performance at Uptown Bill’s instead of the concert hall. This concert took place on Saturday, March 29, 2014.

All photos are by the multi-talented Brandi Janssen. 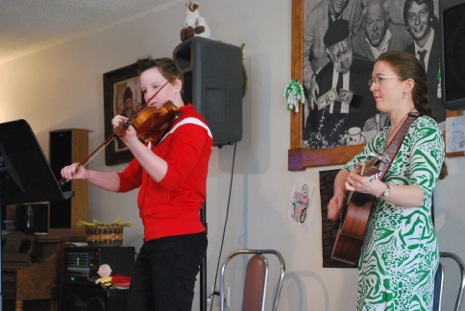 Annie and I playing Christopher Twigg‘s ‘The Forgotten Chateau’ arranged by Kevin Burke and Cal Scott. 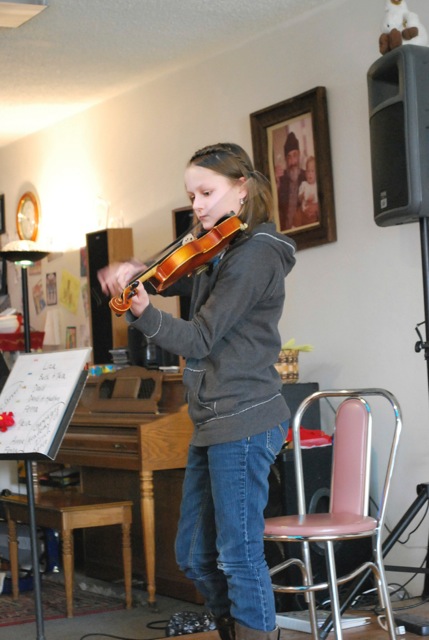 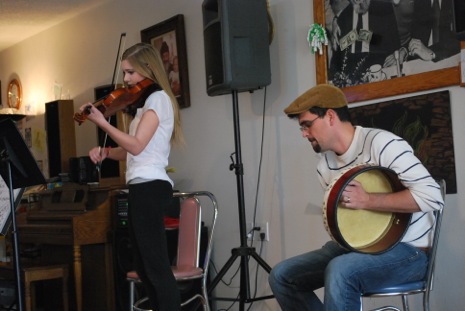 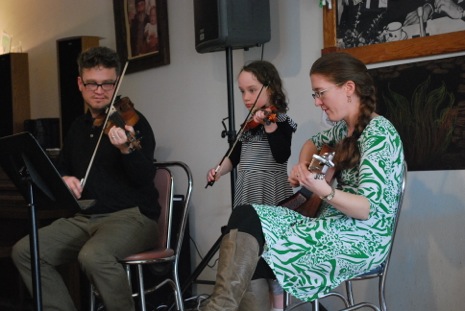 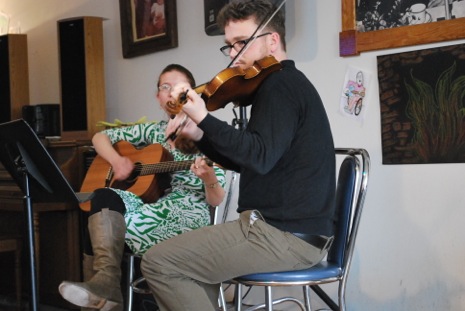 David and I playing ‘Whiskey Before Breakfast’ and ‘Off to California’. 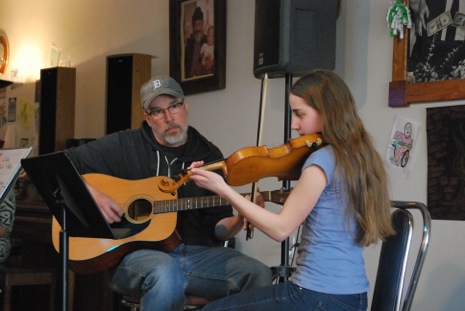 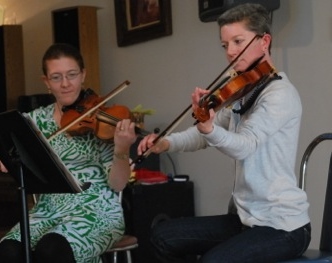 Beth and I playing Edgar Meyer‘s arrangement of ‘Star of the County Down’.

What a fun day and a marvelous venue!! I’m such a lucky teacher. A million thanks again to Brandi for the fantastic photos. 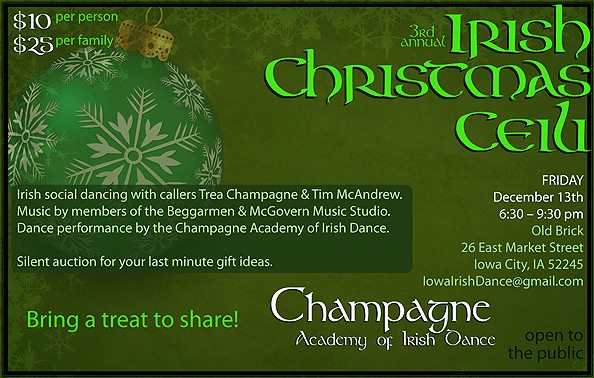 Friends and family, I am asking a favor. This event means a lot to me, my music students, my son, and his dance school. Please consider attending, bringing your family, and telling everyone you know about it. You most definitely will not regret it.

I’m attaching a note from Tréa Champagne, Director/Instructor at Champagne Academy of Irish Dance, about ways that you can help support this wonderful community event.

Dear Friends of the Irish Arts,

Our 3rd annual Irish Christmas Céilí is coming up on Friday, December 13th, 2013 (6:30 – 9:30pm) at Old Brick in Iowa City, Iowa. We’re excited about promoting a local céilí (pronounced “kay-lee”); which is a relaxed gathering involving traditional Irish folk music and social dancing. More information about our céilí can be found on the below website.

In addition to a performance by some of the Champagne Academy of Irish Dance students, we will have a silent auction that spotlights many local artists and businesses. This special holiday event is open to the public and is the school’s only fundraiser of the year. The money raised will be used to cover the cost of the event itself (hall, band, callers, travel expenses, performance, beverages, supplies, etc..) as well as supporting both the Champagne Academy of Irish Dance and Old Brick of Iowa City.

You may not realize it, but you are a vital part of keeping the Irish arts alive in Iowa. Please consider showing your support by contributing using one of the options listed below. Please feel free to share this information to those you think would be interested in our céilí!

Thank you for your consideration, and we hope to see you at the céilí!

Will you help support the Irish arts in Iowa? Please consider one of the following options:

1. EVENT AUCTION ITEMS (due by 12/10/2013)
We are looking for items to be made available for bids during a silent auction at our 2013 holiday event. Want to provide an item, but aren’t sure what? Acceptable items from past auctions: jewelry, gift certificates, small home furnishings, children’s toys, and assorted craft items. Items that make good Christmas gifts are always popular! Please submit an auction form with every item (or smaller items packaged together as one). For more details, and to locate the auction item web form, please visit https://sites.google.com/site/champagneirishdance/home/auction-item-form.

2. EVENT SPONSORS (due by 12/10/2013)
We are seeking sponsors for our 2013 holiday event. In return for your generosity, assuming we attain enough sponsors, we will be printing shirts for the event, and will place your name (or business logo) on the back. For further information, please visit (https://sites.google.com/site/champagneirishdance/home/sponsorship-form).

If you are interested in helping out in other ways with this year’s event, please let us know… new people bring new ideas. If you have any questions, please email IowaIrishDance@gmail.com.

We had a fabulous time at Arts Fest. We play festivals out of town so often in the summer. This was our first year on the main stage in our hometown.

The next three photos are by my handsome brother-in-wish Troy Shehan. 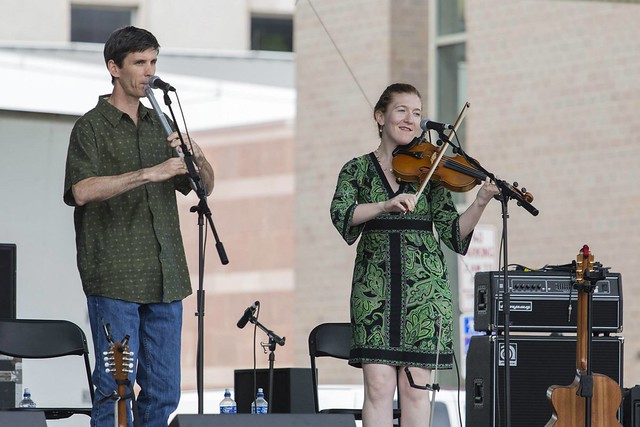 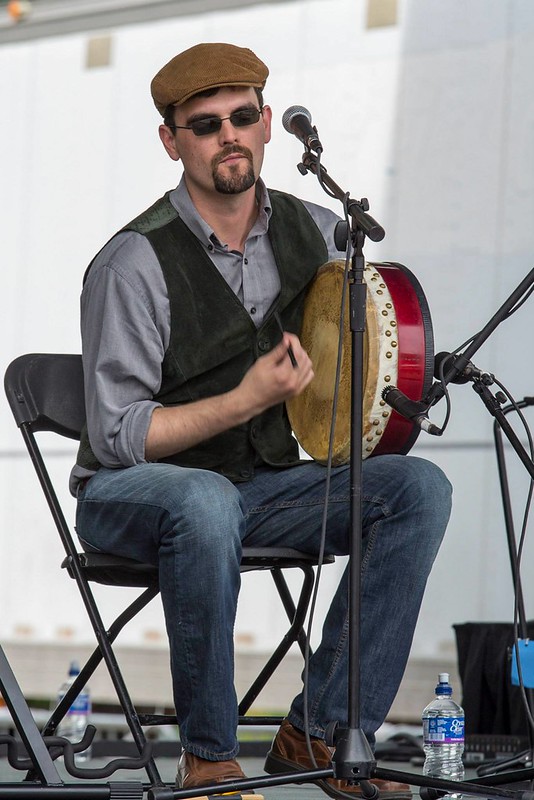 We were thrilled to partner with the Champagne Academy of Irish Dance at the Ireland tent on Sunday providing live music for the fantastic dancers, one of whom provided some music of her own! 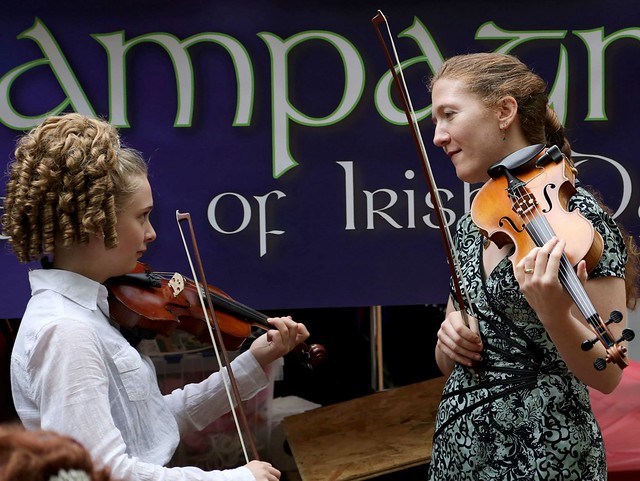 One of my good friends was onstage with her band right before us on Saturday. She made an awesome tic-tac-toe board out of sticks and rocks to occupy my children who were trying to concuss and electrocute themselves backstage. 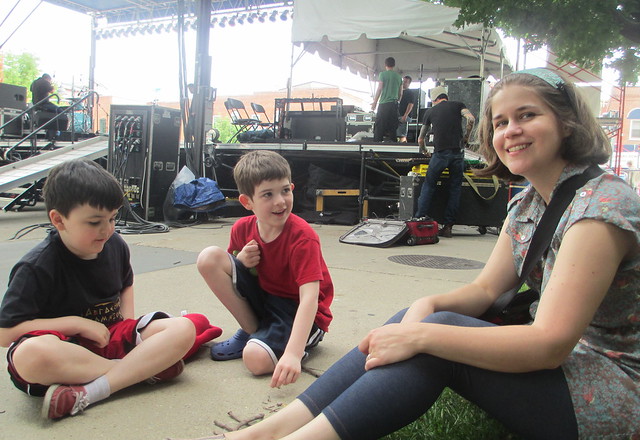 Atticus was very proud to be dancing at Arts Fest. Photo by Kelly Walsh. 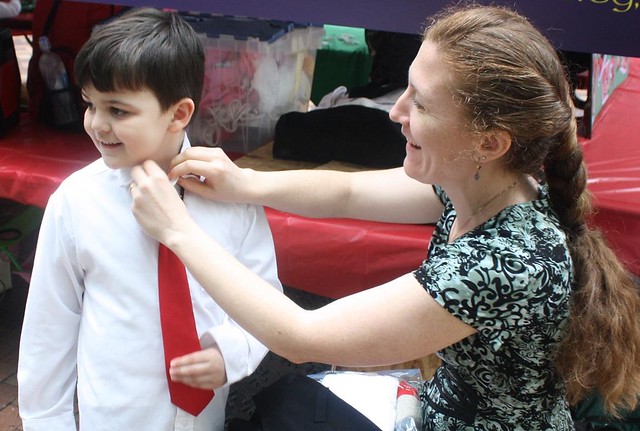 Liam also had a very important job, taking photos of all the fun at the Ireland tent. 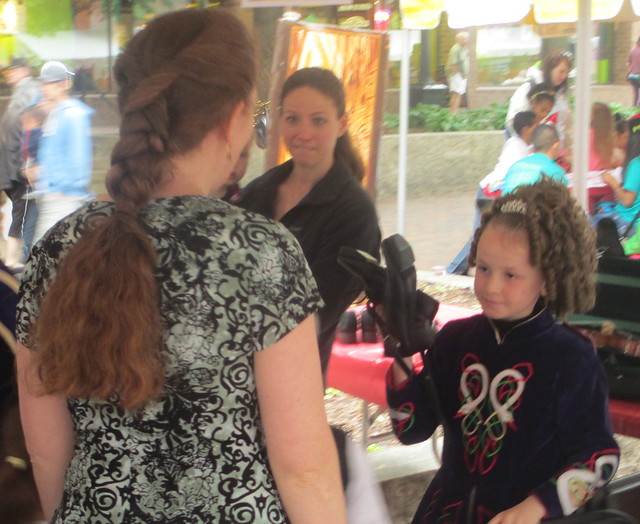 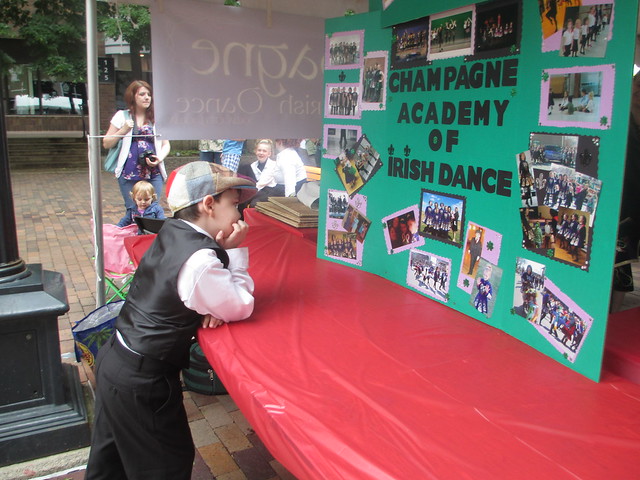 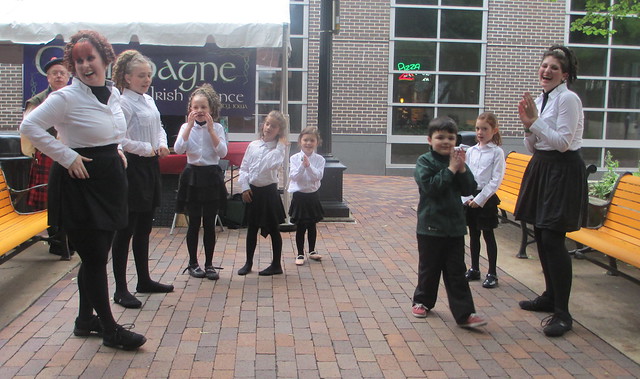 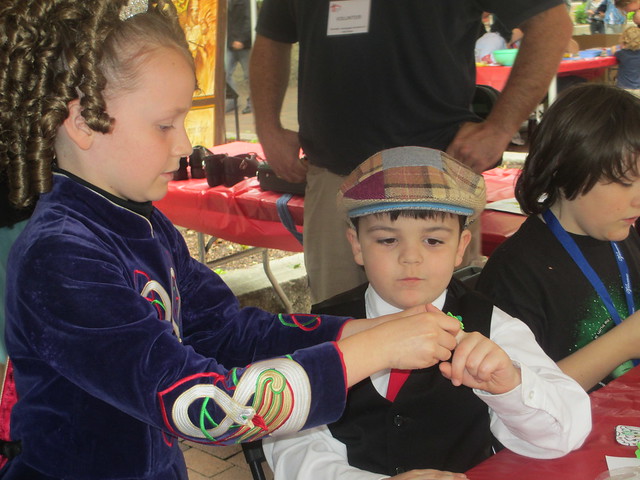 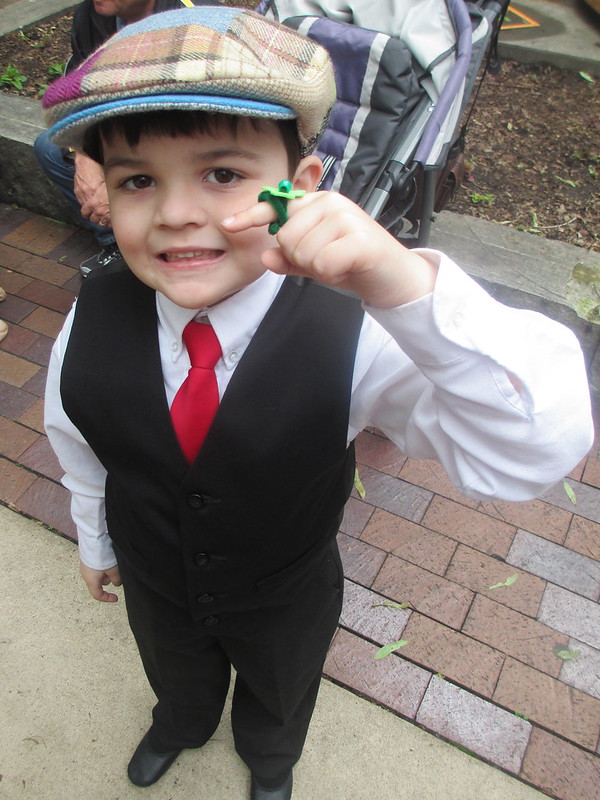 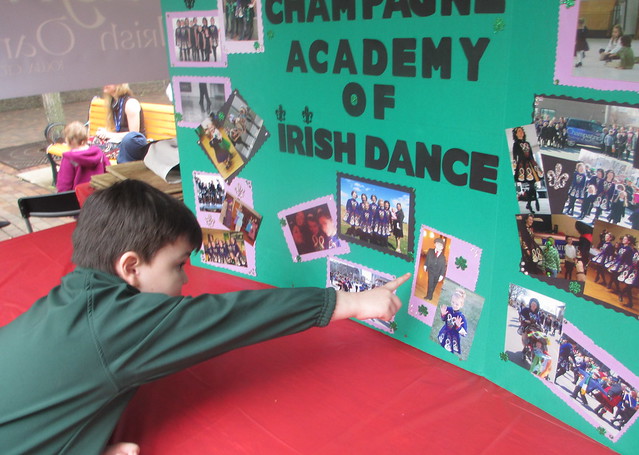 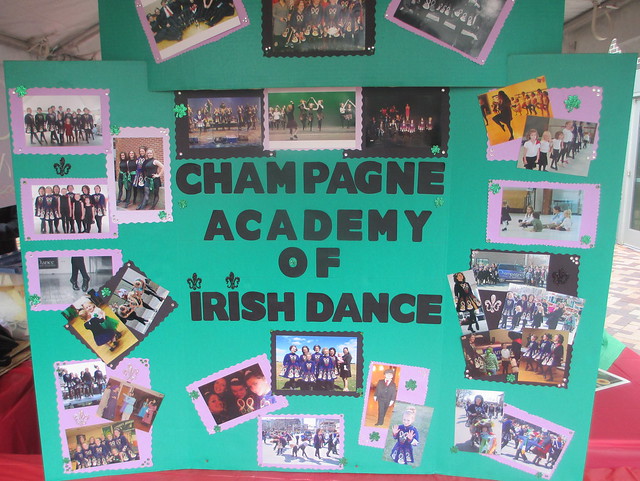 We were very lucky to have grandparents visiting for the weekend helping out with the kids. It takes a village to raise an Irish band. 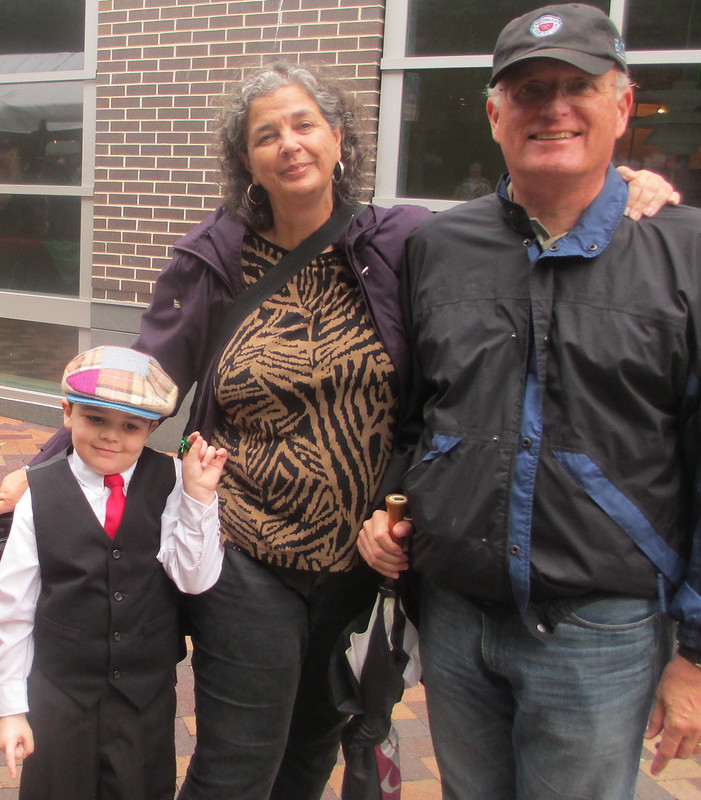 My favorite photo of the weekend, our little dancer with his great-grandmother. 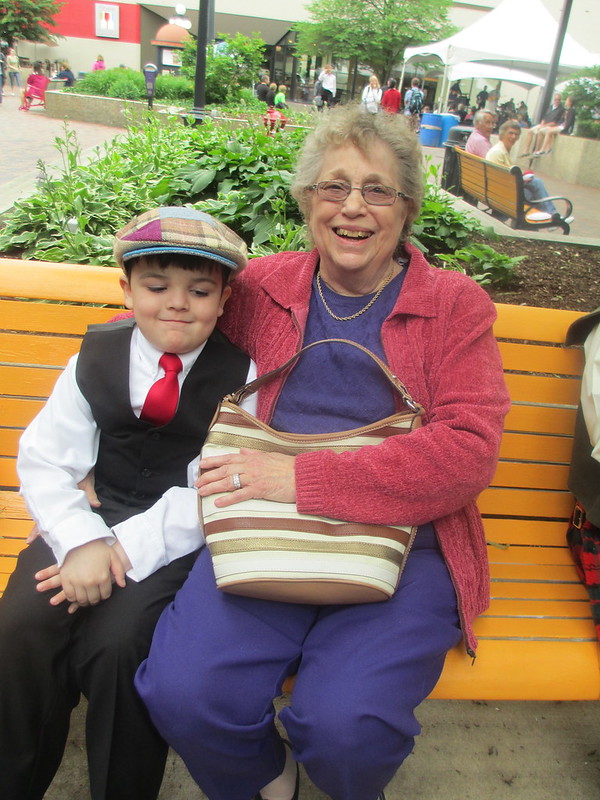 It’s impossible not to love a town that sponsors such an amazing event every summer.

Next up, we’re looking forward to playing at the Reunion Vineyard in Mount Pleasant on July 14 and at the Iowa City Farmer’s Market on August 31.

Also on the books, my friend Jeffrey C. Capps and I will be playing at Mendoza Wine Bar on August 24.

How’s that for a summer of fun? Come say hi!