I recently had the honor of being interviewed by writer Dannye Chase for her delightful new project The Bright Side Blog.

Dannye is as gifted an interviewer as she is a writer and we had a lot of fun discussing creativity and parenting along with many other things we have in common.

Stop on over to read my interview and check out her other interviews and stories as well. Dannye is a wonderful  person to know, especially if you are inspired by looking on the bright side of life.

Joe and I are so grateful to everyone who came and participated in our talk Attunement; Unschooling with Autism this morning.

Here are some related resources that have been very helpful for us:

1) The Sliver by Lori Pickert

Please feel free to find me on Facebook. We look forward to continuing the conversation.

My students, both the ones I gave birth to and the ones who come to me for a musical education, are used to me using sports analogies to illustrate ideas about technique and practice. We all have a good laugh about this instructional tendency of mine because I am the last person you would find doing any sort of sportsing.

By Mike Rosenthal at VectorBelly

Imagine my utter lack of surprise to discover that the term wheelhouse, which I use a LOT, was popularized by baseball, meaning “the zone that is most advantageous for a batter to hit a home run“.

Now that we’re several years into this homeschooling adventure, the one area in which I feel like I have wasted the most energy is trying to convince other people that our parenting choices are not negative reflections of any other parenting choices.

Homeschooling is my wheelhouse. Public and private schooling , for separate and entirely personal reasons, are not. If I wasn’t a professional musician with a strange and varied work schedule; if my son wasn’t autistic; if my financial situation were different; if if if… who knows what my wheelhouse would be.

Sarah Mackenzie‘s guest post at Simple Homeschool (excerpted from Sarah‘s book Homeschooling From Rest; A Homeschooler’s Guide to Unshakeable Peace) has inspired me to consider how I am loading my metaphorical pack as we begin our homeschooling journey this fall. The thing that weighs me down the most, that makes each step leaden instead of light, is making excuses for my wheelhouse.

I know that it will take some vigilance on my part to make sure that this habit of mine doesn’t sneak back in with each well meaning question from a stranger (or often, from a friend) but I dedicate this post to my desire to hold that precious vacated space open for what truly nourishes us on this journey.

Magical March will not be complete without this coming Saturday’s annual music party by my students in the West Music Recital Hall. I have twenty five students performing who range from age 4 all the way up.

One of my students, who studies harp with Malerie Weed, will be also performing on her harp. My little harpist’s twin sister, who studies with my dear friend and the mother of my godsons Jennifer Masada, will also be performing on flute.

Two of my adult students are doing a duet inspired by an enchanting Kevin Burke performance. The three of us were at the Kevin Burke concert together and we were so struck by his version of Deford Bailey’s ‘Evening Prayer Blues’ that we decided to arrange it as a duet.

Atticus will be singing and accompanying himself on piano and Liam is the official photographer for the day. He studies ukulele with another teacher so his performance opportunities will come later.

Photos and hopefully a bit of video to follow!

Do I have the best job ever or what?!?

Atticus and I were recently honored to give a presentation on Irish music to our friends at the homeschool assistance program. Here we are singing “The Song of the Seal”.

I still have trouble believing that my littlest baby boy is this big and mature. Bittersweet. He still has some baby left in him though. Can you spy him acting very much his age in the next photo?

Yesterday it rained.  I went to see my bandmate do an excellent presentation on writing and folk music. When I returned home, a superhero series had begun filming at my house.

The Cavan Fiddle Studio musicians put on a beautiful performance on March 31, 2012.  Each of my students performed one of their favorite tunes so it was a fantastic mixture of many kinds of music, from Irish and Scottish traditional music to blues to folk songs to classical music and even a breathtaking original composition.  I’m so proud of each one of them.

I know there are a few more photos and videos that are floating around out there in the webiverse and I will try to collect some more of them in this space but in the meantime, I do have one to share that’s very close to my heart. 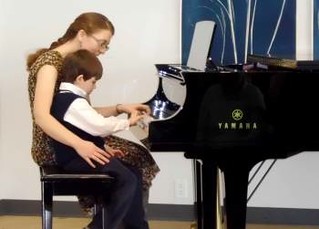 Liam and I did a duet from Star Wars, a subject of near obsession by almost all of the Dutcher household.  Sam (the dog) and I are only mildly interested.

Many thanks to the good people of West Music for providing a beautiful performance space to the conservatory teachers!  When I think of all the music that is yet to be made by these amazing music students in their lifetimes, I am convinced of the significance of this work.  I feel so honored to have the privilege of traveling this career path.